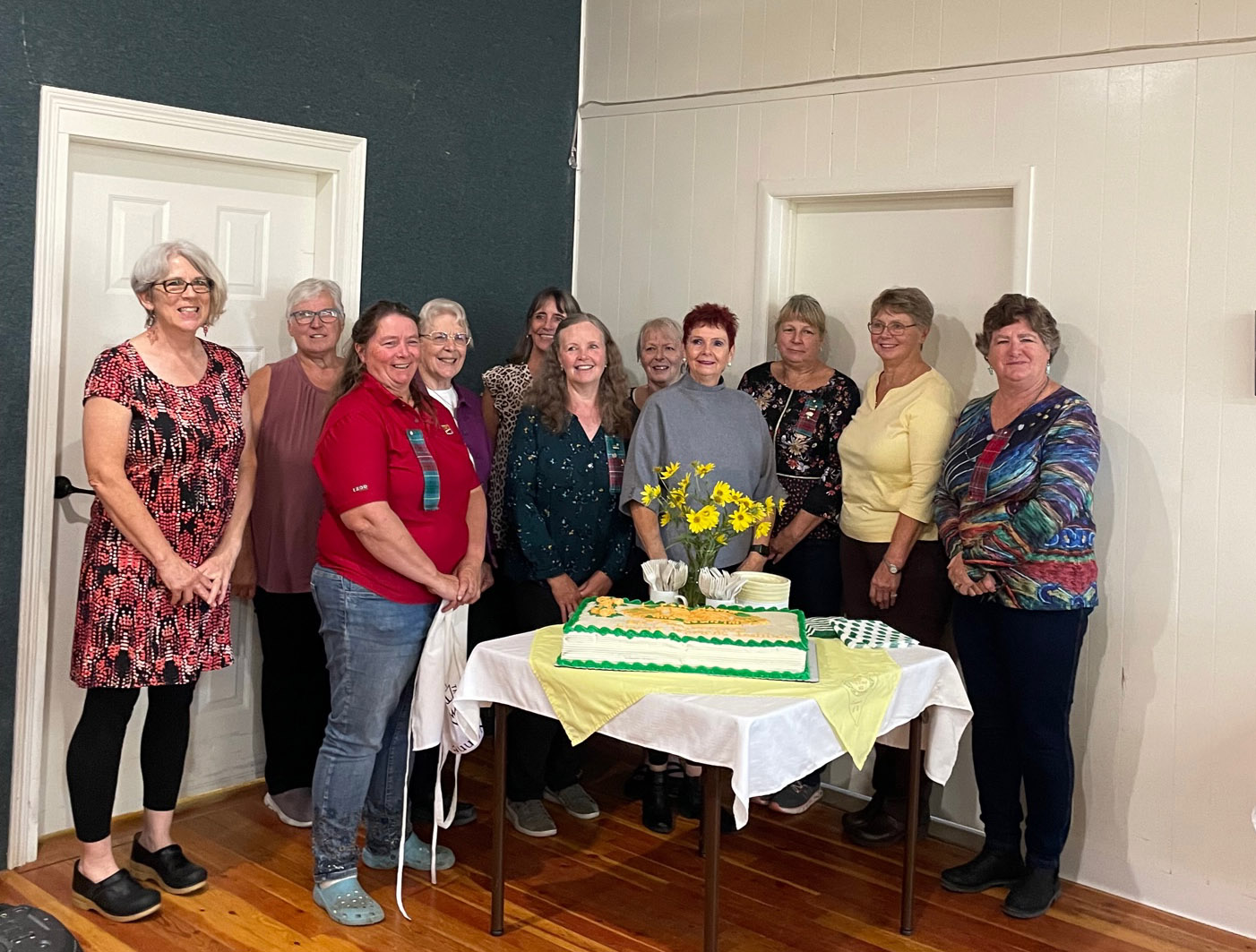 Saturday September 24th saw family and friends of all ages gather at the Grasmere Pioneer Hall to celebrate the 85th Anniversary of the Triangle Women’s Institute. The walls of the hall were filled with photos and memorabilia and included a continuous slide show of past and present events.

Judy Lou McDonald was master of ceremonies and began by revealing Queen Elizabeth II was a member of the Sandringham Norfolk, England chapter attending meetings and functions until her passing, her group members stated she was, “Simply One Of Us”.
In Canada the Institute was started by Adelaide Hunter Hoodless who has a connection to the area as guest Julie Laird said that “Hunter is the grandmother of my cousin Harold”.

One of first tasks was to select a name and Triangle was chosen as best to represent their area. The first fundraiser was a served dinner for the Farmer’s Institute that netted the newly formed organization a whopping $40 to start them with a good financial base. Other projects followed with Christmas gifts for seniors and shut-ins, quilting for needy families and hospital patients, donations of good used clothing for Unitarian Service Committee, donations to the Sewing Machine for India fund, for training centers in Ceylon, knitted squares for Zambia and money sent to aid flood victims. TWI was awarded the USC Scroll of Honour in 1979 for outstanding contribution to the Unitarian Service Committee of Canada. Letters and parcels where sent to servicemen overseas during war years and welcome home parties held for local servicemen returning home. The list of contributions is long including aiding with the purchase of first BC Children’s Hospital and outfitting the nursery at the Fernie Memorial Hospital with baby layettes, night gowns and receiving blankets greatly appreciated by new parents.

Quilts and other crafts have won prizes in district competitions and the PNE. For years the institute served meals during the cattle sale at Elko BC with members trekking through dirt roads and staying at the stockyards cooking in tents often in icy rain or snow. Later a grant allowed for a dining hall to be built, this work has been discontinued since the cattle sales at Elko are no more. Today the TWI continues to provide catering services and at Christmas local seniors enjoy a home cooked turkey dinner.

A long-term project was achievement of a hard surface road between Roosville and Elko. It took 20 years of requesting it and finally the government made it happen. On September 1958, 240 officials and guests were treated to a hot lunch at the opening ceremony. Next project was October 1958 when after much work the ladies were successful in having hydro power brought across the border from Lincoln Electric Co- operative of Eureka, Montana. Another project was to get telephone service in the 1960’s something they still work on to get the system upgraded and the building of a new hall.

It’s clear from the first beginning to present day getting together for these ladies wasn’t about socializing, they followed their Mission statement “Working to Build a Better Tomorrow for Family and Community,” and their motto “For Home and Country”. 85 years of visionary individuals willing to work hard and “face challenges at any level and at any time”. The membership is smaller but the drive and ambition is there with initiated new projects. In 2000 a community library was added to Pioneer Hall and with assistance of grants from CBT and RDEK renovations have increased the use of the hall. They continue to lobby for drug patent regulations, crimes against children, genetically altered food, education of women and much more, they say. Raffles, quilts, potluck suppers and bursaries to Fernie Secondary School and Jaffray School, continuation of sponsorship 4-H club and programs, attending the Baynes Lake Farmers market and helping where needed as well as always being available to educate the public about the Women’s Institute and the local Triangle Women’s Institute.

With the CBT Energy Sustainability Grant in 2019 a 16.5 kilowatt solar system producing 17 kilowatts of AC power annually covering 70% of the Hall’s current energy consumption was installed. This they say allows them to focus their fundraising efforts for other community initiatives instead for covering the cost of operation. While also reducing the impact on the environment as it is the equivalent of TWI planting 9306 trees and energy not used equates to 844 barrels of oil every year, the hall is also insulated and paneled with new windows on the east side.

Thanks to CBT funding and Columbia Basin Institute of Regional history a TWI website has been produces with articles, videos and photos that is accessed at http:/www.trianglewomensinstitute.ca

They have completed five history photo panels and are working on 13 additional panels that depict the Pioneer families of the Grasmere valley.

Covid caused a change and instead of dinners they had meal delivery for shut- ins and seniors. Their charitable work continues with Angel Flight and the Ukrainian Relief Fund. This year their Popular Snow Flake Luncheon and Bazaar is back on November 5 from 11:30 to 2:30.

Today there are 15 members with 11 active ones. McDonald said there is work, laughter and good times, they are working to build a better future for home and country, this was a relevant organization when it first began and is still today, when new members join they take the place of those gone and so the group continues to thrive. 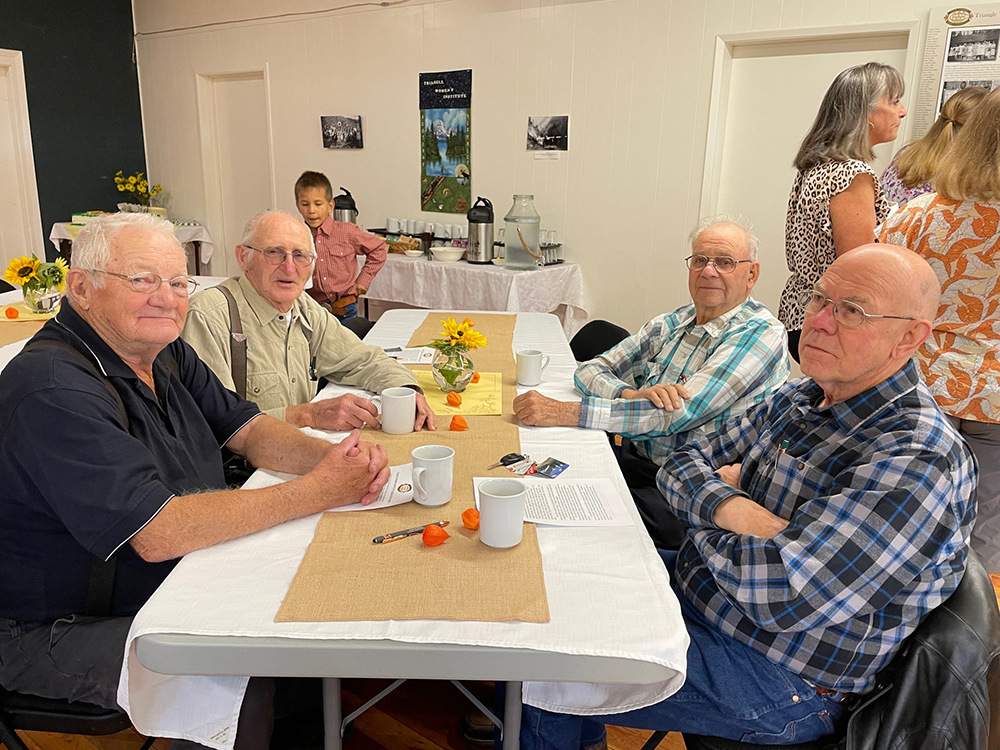 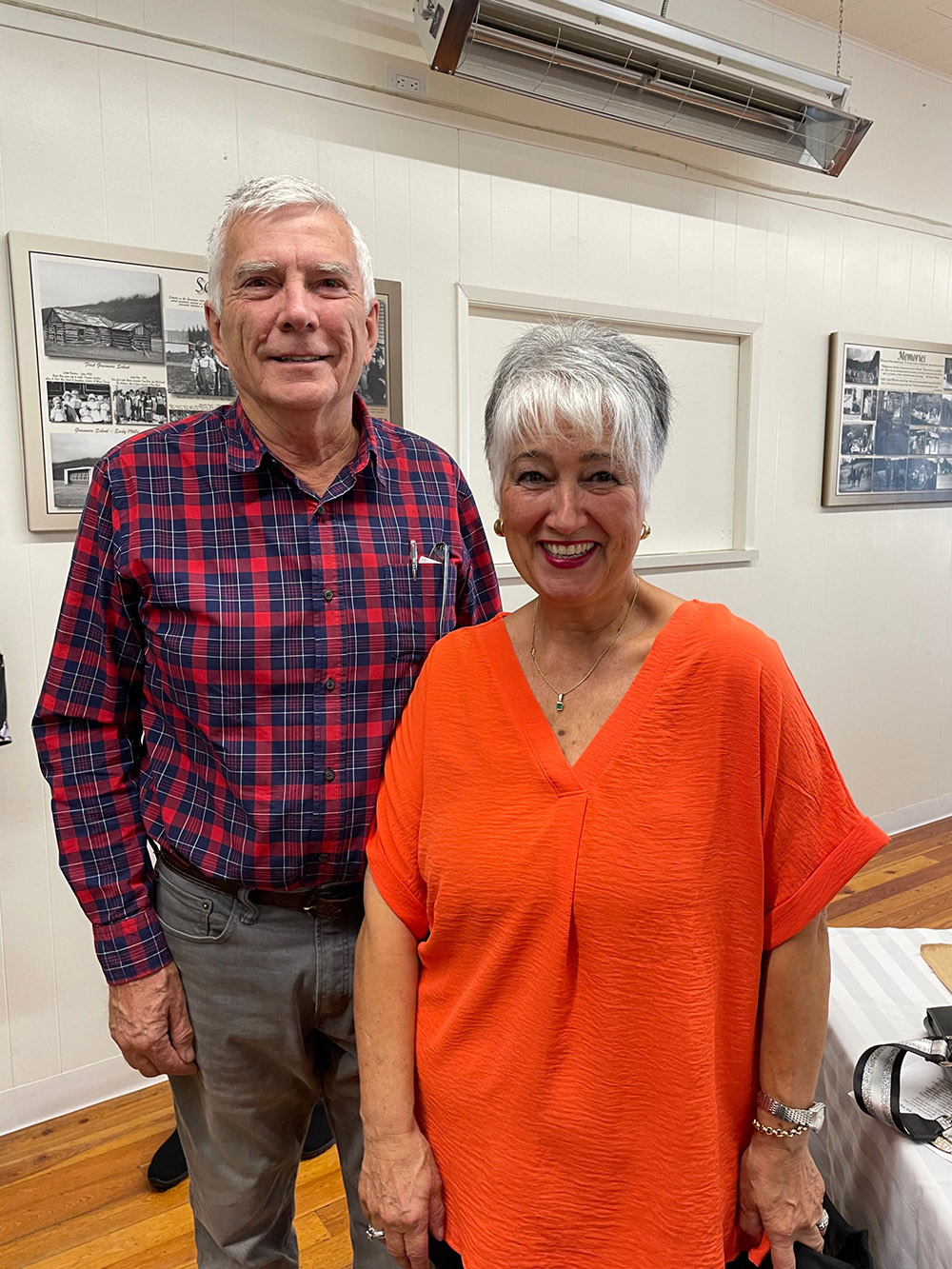 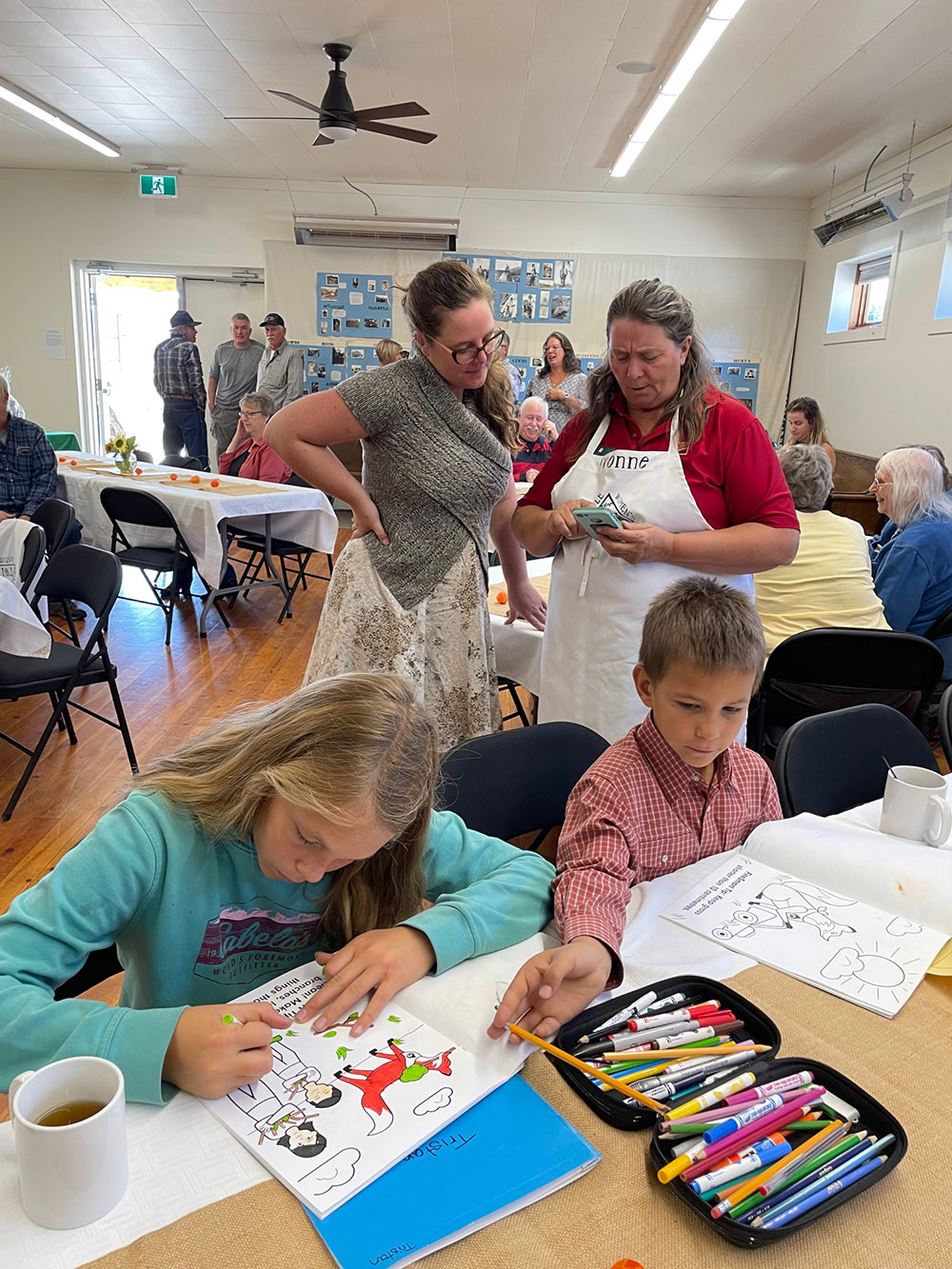 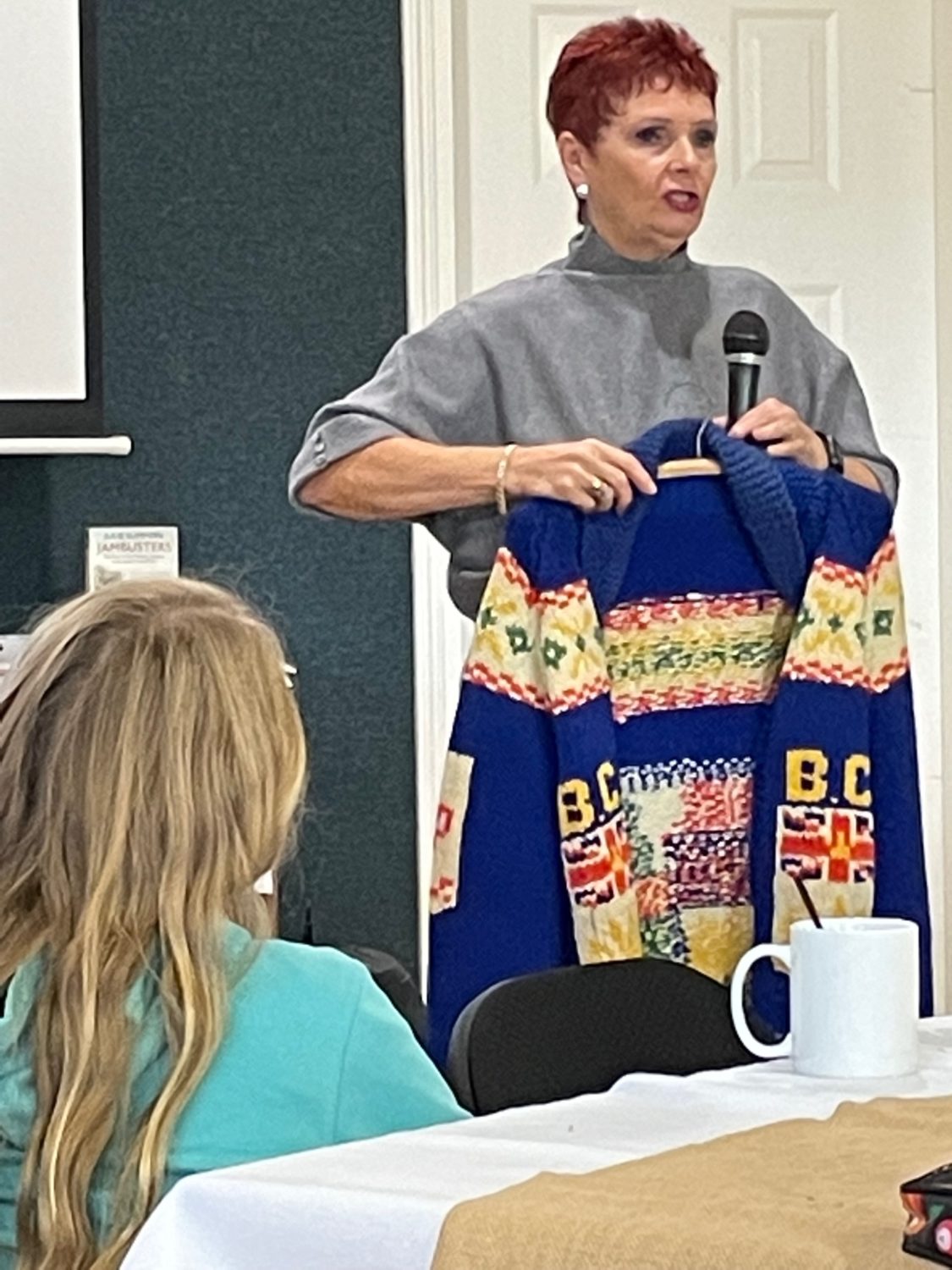 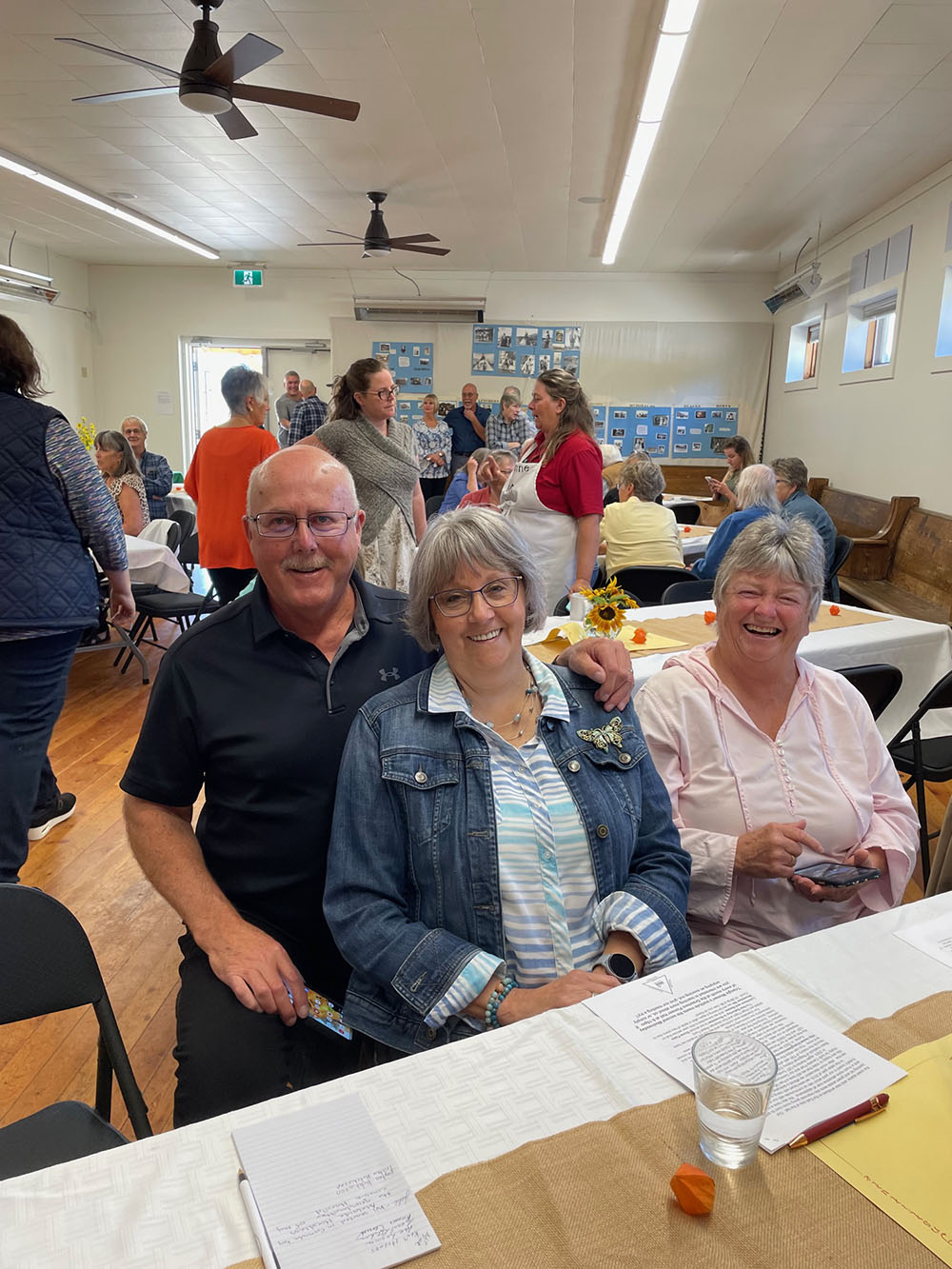 Area B Director Stan Doehle spoke joking that he wasn’t campaigning. Director Doehle (He is acclaimed) congratulated them on 85 years saying this was quite a feat to continue for so many years, mentioning how the institute is across Canada and how Lita Salanski won first prize at the PNE for her beautiful knitted sweater.
Past Director and UBCM president Heath Slee thanked Judi Lou McDonald for the history lesson saying it was a good look back on the number of people who worked in this organization and how much they achieved. Kaileen Gervais from CBT also congratulated them on the anniversary and on their sponsorship of the 4-H club.
It was also mentioned that several descendants of the original founding members were in attendance to mark this occasion.

85 years of contributing to “Home and Country” by several generations of families is indeed remarkable, Congratulations Triangle Women’s Institute and wishing you many more years of successful and generous volunteer work.