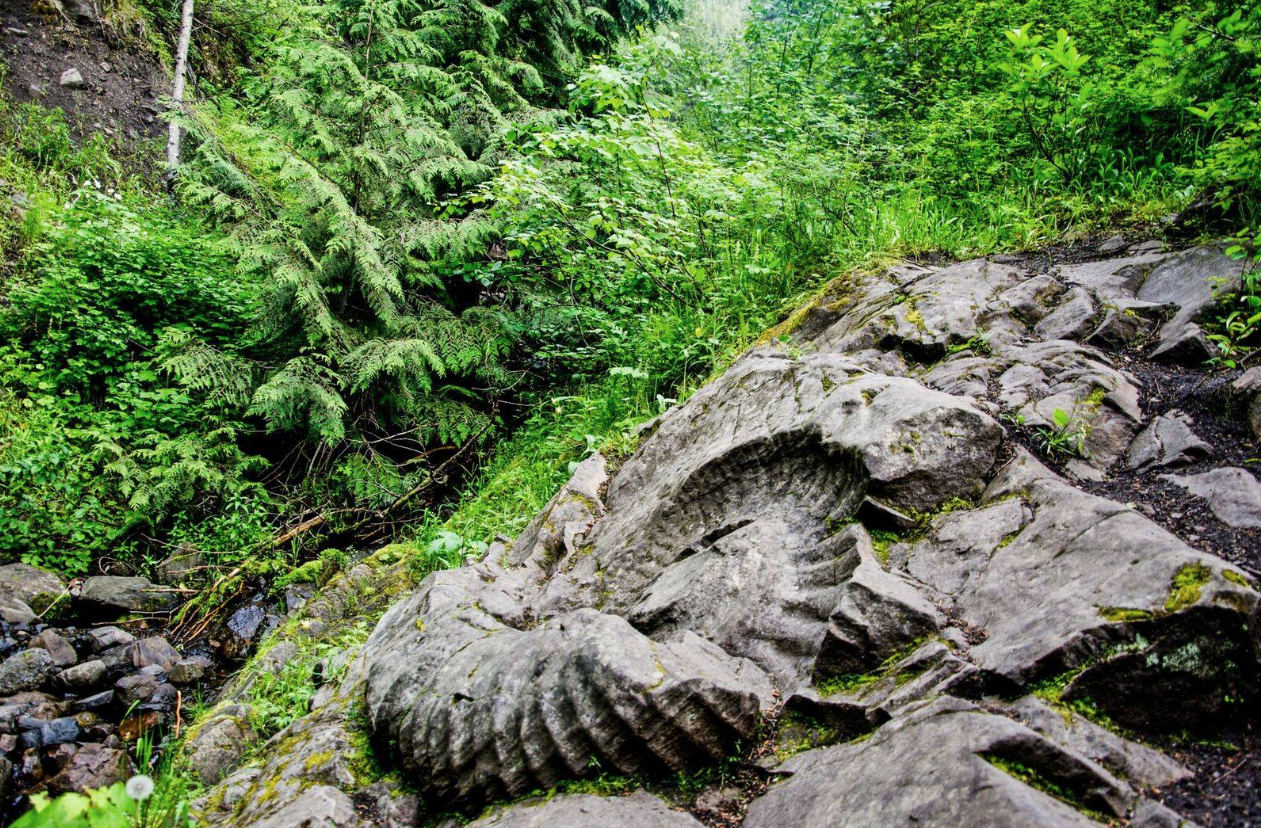 UPDATE TO THE EDITOR

CanWel has logged the slopes on the south side of Coal Creek, the north face of Castle Mtn. The Ammonite Creek drainage is largely in tack except for the Branch L logging road crossing it in two places. Now the access is bike or hike 3.5 km along the logging road and then hike up 200 meters, 40 vertical meters to the Ammonite. See the map and images below: 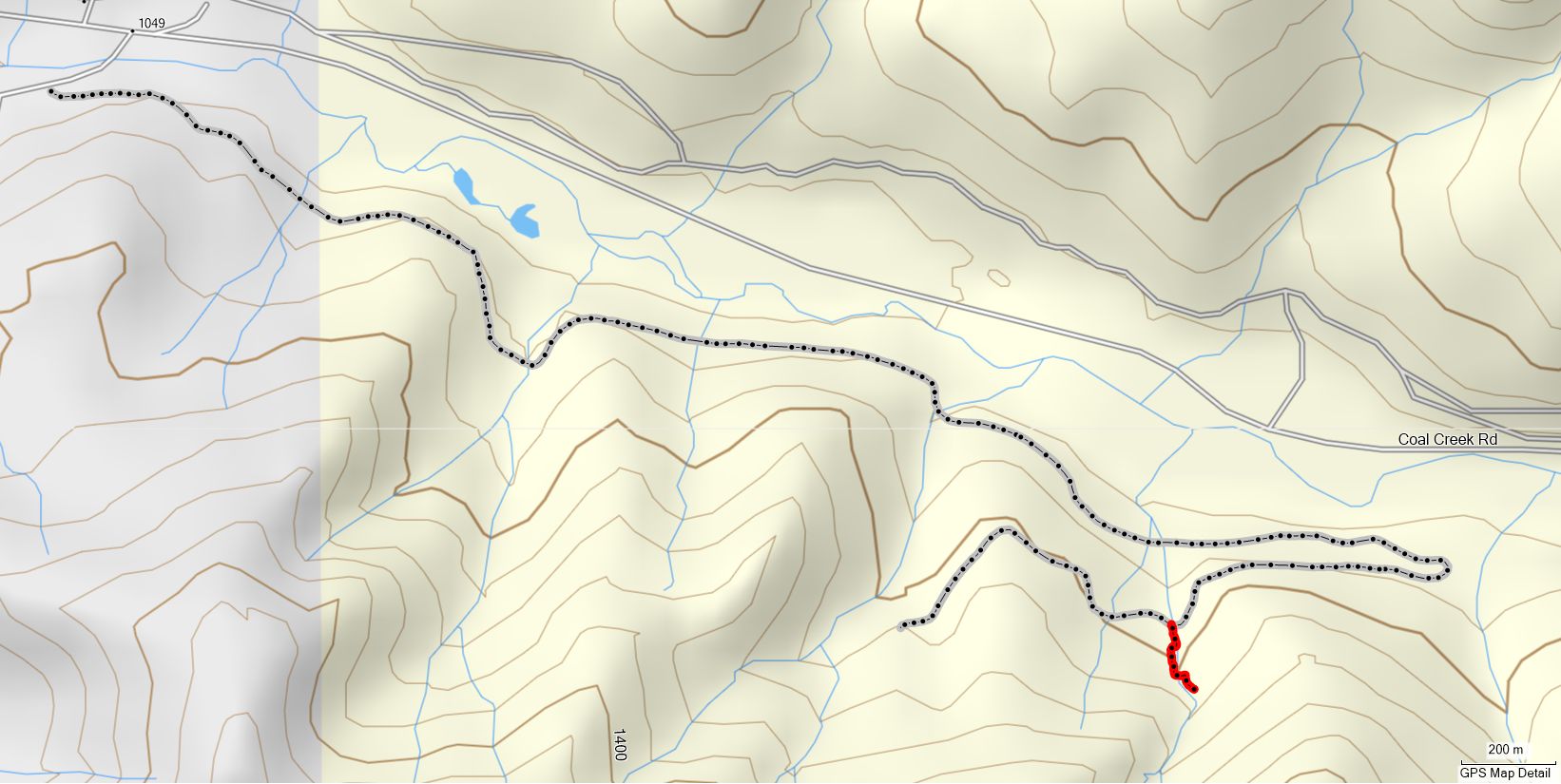 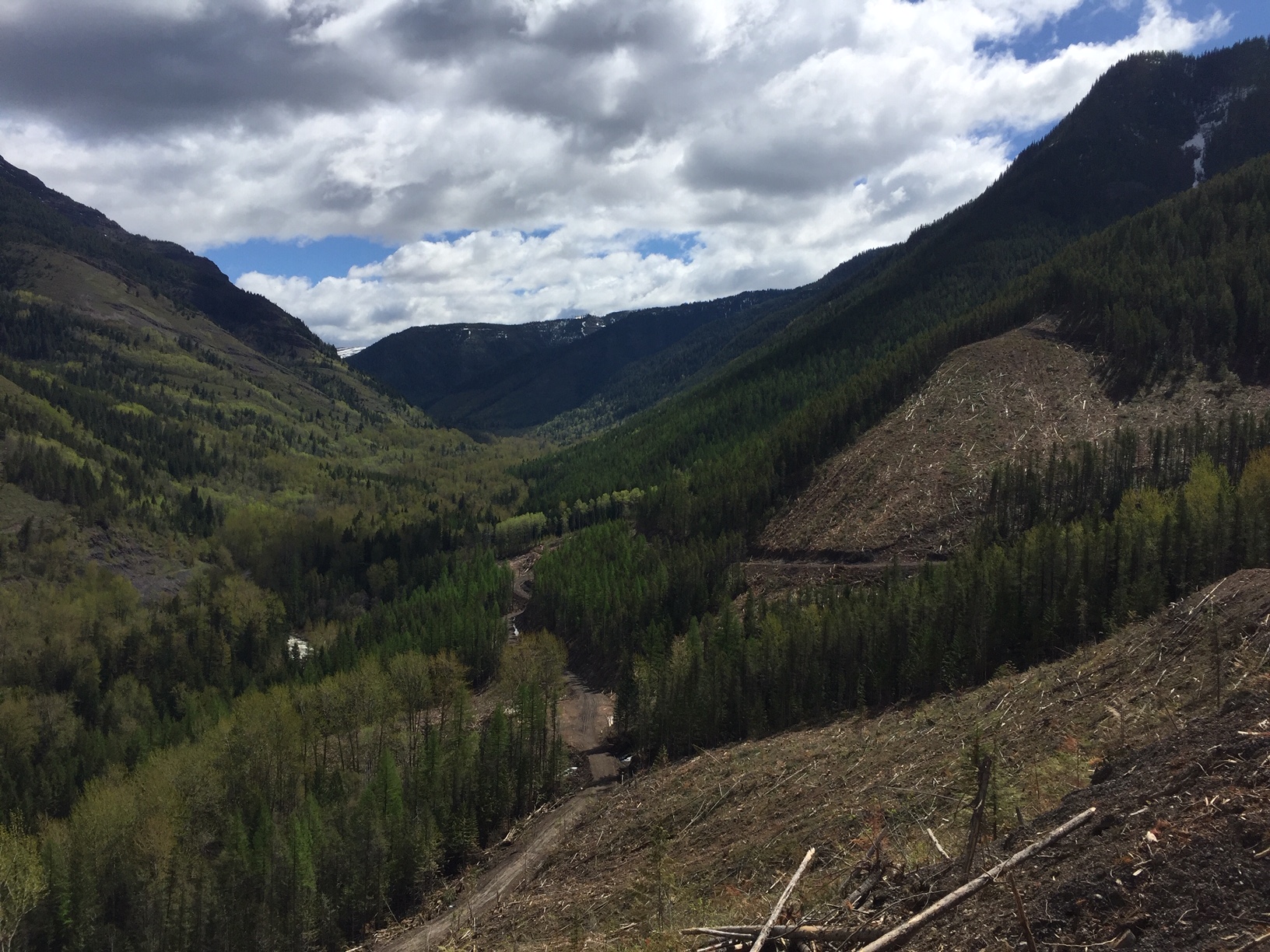 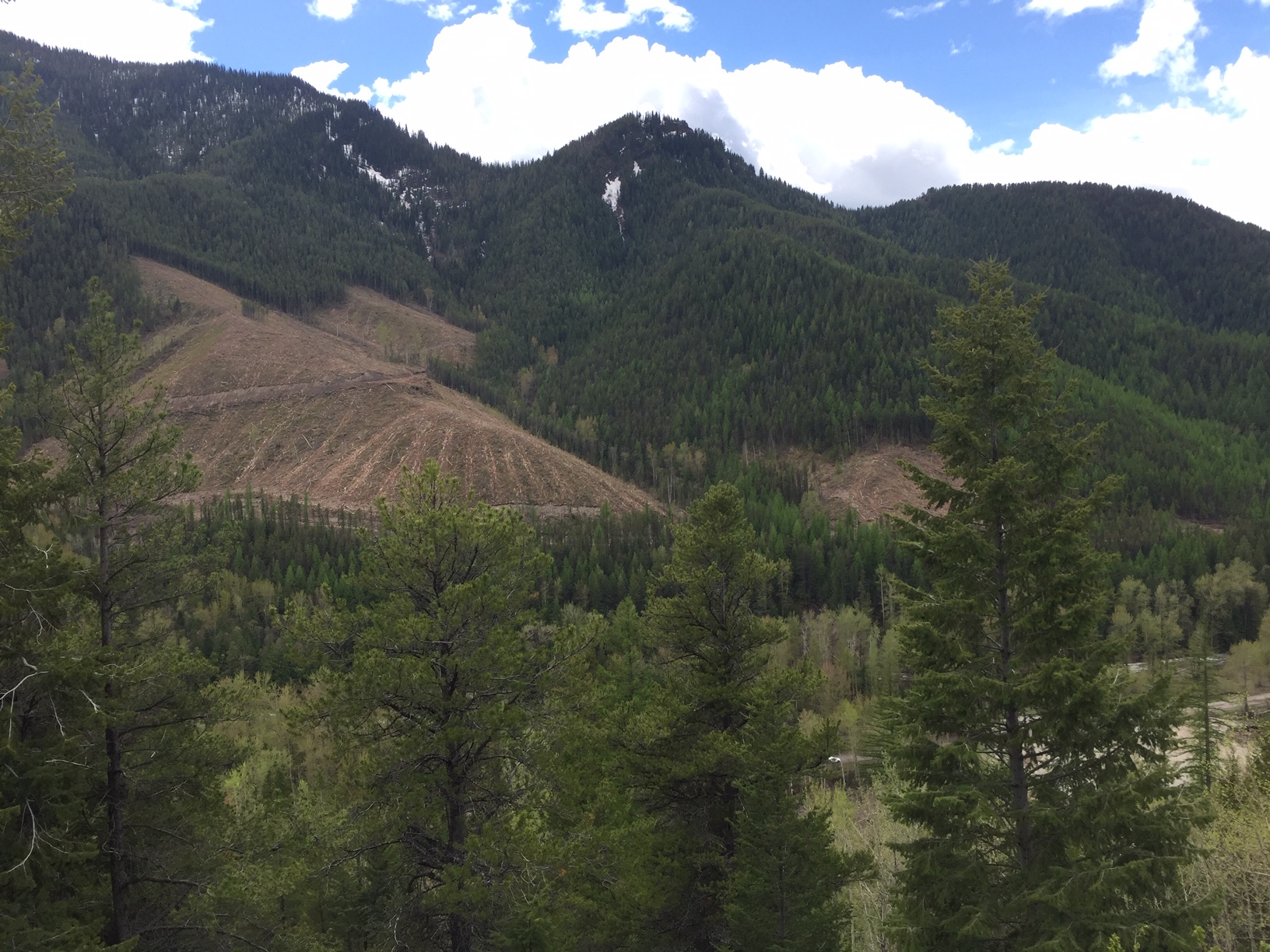 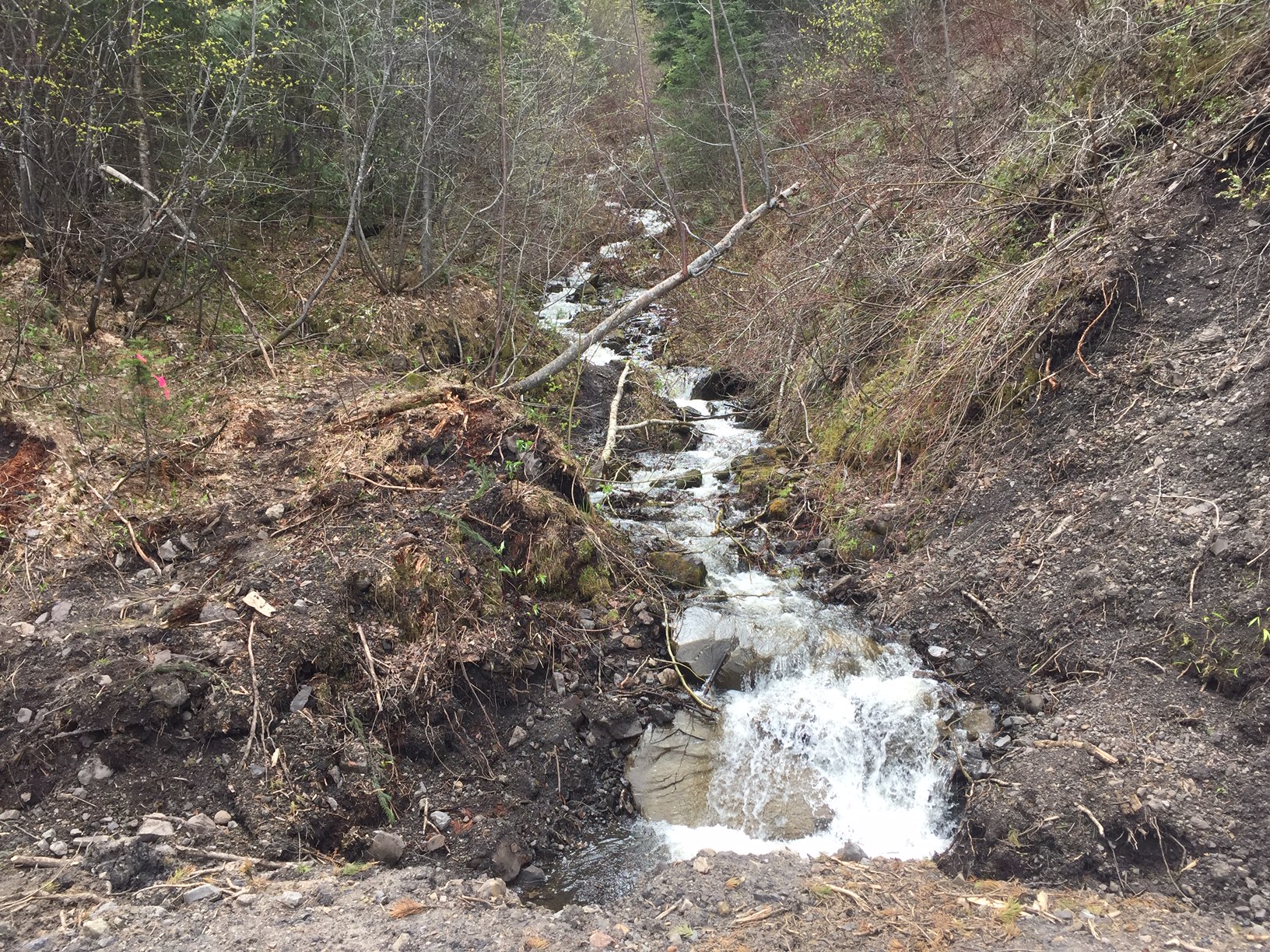 Letter to the Editor

Survived by a mountain lady and a community of mountain people. Ammonite Trail you are greatly missed.

A couple of weeks ago, with my dog; we were excited to visit the Ammonite. It was a dreary day. The Elk River almost high enough to cause concern driving over the dirt road bridge on the not so long way out to The Ammonite.

It was an ideal day for a mushroom hunting mountain lady and her mountain (the mushrooms used to come out there during and just after a fresh rain). The forest canopy where we spend time together – or used to – offered good cover from the rain.

Elsewhere (everywhere else) in our valley the rain seems to defy gravity on a day such as that and come at you from all angles – but never on the Ammonite because it was full of big, old trees that seemed protective and wise. That place was perfect.

The Ammonite trail was special and will be missed. Sacred plants grew on that trail— like Devils claw and with such a name it’s no wonder most God fearing folks here never paid that ancient plant relic carried over from a time when Harpagophytum (the correct name for Devils Claw in Latin) leaf was a food source, for dinosaurs and mammoths.

This was a very slow growing, and borderline endangered plant that was (as far as any scientific dating can conclude) literally as old as dirt and had a limited natural habit here in the Elk Valley unsurprisingly near the biggest and oldest Ammonite fossil in the world.

It was a terrible surprise to find The Ammonite Trail had lost its battle to industry. I’m not sure of the exact date or time of its passing, but the last time (before this) that I walked the Ammonite Trail all was well with it.

Now, due to being extensively logged— the pristine creek bed which once flowed free to nourish such rare plants has been destroyed. Diverted into funnels under industrial dirt roads. This trail is dead. RIP lovely creek. RIP beautiful trees.

This was also an area that until recently supported huge colonies of ancient Reishi mushrooms among other traditional and none pharmaceutical herbal gold. Losing that trail, we have permanently lost so many things that have, for centuries, been ancient to the Elk Valley. The Ammonite Trail was one of a kind and irreplaceable.

I was able to forage (some) of the Devils claw plant. To make medicine in the traditional way taught to me, and to attempt to clone it, and I’m going to re-plant what I salvaged.

When my daughters have grown into mountain ladies themselves— we will go up other mountains. And, (if the roots take) I will show them this plant and teach them the history of it and how it’s the last of its kind.

But it won’t be the same as going up The Ammonite Trail and showing them the plant (in its natural habitat) with the fossil too.

The Ammonite Trail was an important access point to the wonders of nature and history for many people in the Elk Valley.

No services will be held.