The Fernie Ghostriders won 4-2 in Kamloops Sunday night to win their best of five series against the Storm 3-0. The Ghostriders will now play Nelson in the KIJHL final. The home game dates are March 26 & 27 @ 7:30pm. Nelson will have the home ice advantage. 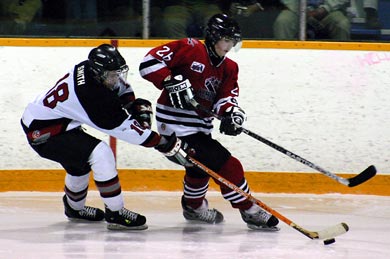 The Ghostriders have been outstanding so far in the playoffs and have won 11 games in a row to get to the KIJHL final series against the Nelson leafs. The Riders won their series vs Invermere 4-0, Creston 4-0 and Kamloops 3-0. The Nelson Leafs won two series’ to get to the final, the first one 4-0 over Spokane then they battled Beaver Valley to a 4-2 series win. Nelson got a bye because they finished in first place with 82 points, but because Fernie with 80 points swept all three series’ they have only played one more P/O game than the Leafs . Nelson has played 10 games and Fernie has played 11.

The Eddie Mountain Rookie of the year 17 year old Trever Hertz has been the beneficiary of 20 year old Martin Croteau and Jon Roth’s outstanding playoff performance and so far Trever has 11 goals and 11 assists and is the top KIJHL scorer. Both Roth 17 pts. and Croteau 21 pts. have been the best players on the ice in all of the Rider games and have been playing Jr “B