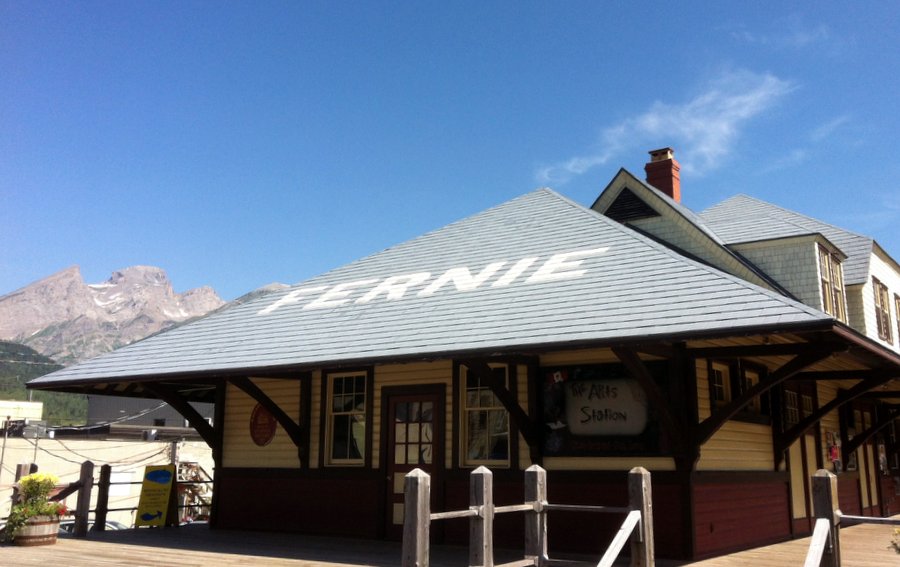 Forty years ago, several local Art Guilds joined together to form the Fernie and District Arts Council. Ten years later the Canadian Pacific ceased their passenger service and the Fernie train station sat abandoned and derelict. The railroad planned to burn the station down. With some urging, instead they sold it to the City, which leased it to the Arts Council (the Guilds).

The station was a wreck. Paint peeling. Windows broken. Bad freight deck. The Guilds built a new foundation, moved the building away from the tracks and restored it to include a theatre, a restaurant, a pottery studio, music rehearsal rooms and Guild meeting rooms upstairs.

When a person became an Arts Station member, one of the benefits was the option to join any of the Guilds—pottery, fibre arts, painting, quilters, choir, friends of the opera, and so on. The Guilds formed the core of the Arts Station and provided a solid program of learning and community for members.

This spring each Guild was presented with a “User Group Agreement”, see the agreement here. Without consultation, the Arts Station Board reduced each Guild use to only 80 hours a year (roughly an hour and a half a week), placed numerous requirements on their operations and required a payment of $300, $500, or $700 to remain a part of the Arts Council and continue to use the Arts Station.

Once the Guilds pay their User Group fee, they will have one (1) vote as a member of the Arts Station. Guild members will no longer be Arts Station members and eligible to vote at the AGM or at Special Meetings unless they pay an additional membership fee. There are over 200 members in the Guilds that will be reduced to only six or seven votes at the AGM or a Special Meeting.

This action came at a time when the Arts Station membership is critically low, having dropped from almost 500 in 2014-5, when Courtney Baker was the Administrator, to just 50 members this June. This is a seven year trend of diminishing membership, not a dip as the result of Covid.

At the recent contentious AGM September 16, the Board of the Arts Station further compounded the problem by initially offering a slate of seven members for the Board. In fact, twelve Arts Station members submitted the paper work to be considered for election to the nine-member Board. In direct contravention to the Arts Station Bylaws, the Board refused to put all the qualified nominees forward for the election. The Governance Committee arbitrarily eliminated five of the aspiring Board members. The call for nominees included “under 35 demographic.” A clear violation of the Human Rights and a requirement for an interview (not required in the bylaws). A slate of seven is not an election. It is an acclimation.

The result? A motion to put off the election and a discussion of the new User Group Policy to a Special Meeting on October 14, 2021 to give all those nominated an equal playing field. The initial back and forth debate ended with a tie vote. Then, after re-opening the debate, another vote put the election of the Board and the User Group discussion off to the Special Meeting by a single vote.

This delay gives the Guilds more time to discuss their options going forward. To remain in the Arts Station? Or to find alternate meeting sites? One Guild decided to leave the Arts Station. Two have signed and paid. The other three Guilds are holding out until the discussion and vote on the continuation of the Special User Policy at the Special Meeting October 14, 2021.

Meantime, the three that have not signed have been told they can no longer use the Arts Station until they sign the agreement.

This is the text of an email sent to the Spinners and Weavers by their President on September 17, 2021 concerning signing the User Group contract and use of the Arts Station;

Please let me know if you are still unable to read these. [the agreements attached]

These are being put in place so that the guilds don’t have to get their own 3rd party liability insurance and can be covered under the Arts Station’s insurance policy. We can’t use the Arts Station for guild meetings or workshops until we get this signed.

Previously, since Guild members were Art Station members, there never was a “3rd party liability” issue. This is an issue for weddings and outside group renting the Arts Station for a function. The Guilds are now on a par with weddings and any other rental event at the Arts Station.

Any founding Guild that doesn’t pay the User Group fee will no longer be a member of the Arts Station and no longer be able to use the facility they built.

All the debate is secondary to the drop in membership. To survive, the Arts Station must have members.

For anyone who enjoyed the Wednesday Socials or the concerts we once had (and will return, hopefully) or the camaraderie of a Guild, this is a small annual measure of support for the Station and their activities.

This membership gives you a vote and a voice at the Special Meeting on October 14, 2021. This meeting is critical in determining the future direction of the Arts Station. Will the membership recognize the importance of the Guilds and maintaining them? Or will the membership align with the Board believing the Guilds must be diminished to move forward?

Join. It matters. Attend the meeting (a Zoomer). It matters. Vote. At the AGM, with 74 voting members, every motion was carried or defeated by the margin of a single vote. Every vote counts. Really.

Join the Arts Station. Have a voice in how the Station moves forward.

Most importantly, support arts and culture in Fernie, an integral part of our life here.