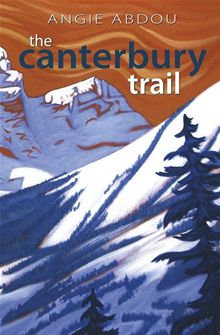 Jack Rabinovitch founded the Giller Prize in 1994 in honour of his late wife, literary journalist Doris Giller, who passed away from cancer the year before. The award recognized excellence in Canadian fiction – long format or short stories – and endowed a cash prize annually of $25,000, the largest purse for literature in the country.

In 2005, The Giller Prize teamed up with Scotiabank to create The Scotiabank Giller Prize. It is the first ever co-sponsorship for Canada’s richest literary award for fiction. Under the new agreement, the purse doubled, growing to $70,000 with $50,000 going to the winner, and $5,000 being given to each of the four finalists.

In The Canterbury Trail Angie Abdou explores the way in which people treat their fellow citizens and the landscape they love.

“Take a tiny ski cabin in the middle of an avalanche trap, add pot, mix with booze, then shake until the earth moves and wild yarns will get spun. Out of BC rides Angie Abdou, a story-slinger with a bear of a tale about the mountain west today. Jump on quick and hold on tight: it’s a wild and ribald ride.” – Sid Marty, author of The Black Grizzly of Whiskey Creek

To help Angie be considered for the Scotiabank Giller Prize please submit your online nomination at www.cbc.ca/books/scotiabankgillerprize/