The West Bridge Site was chosen largely based on its exposure to the public and opportunity for adjacent park developments in cooperation with the Regional District. The site is located upstream and downstream of the West Bridge and is designed to be, in part, incorporated into the bank armoring that is taking place on the dikes through this reach.

Additionally, the Regional District has expressed a desire to develop the parkland that is adjacent to the Elk River on the River Right bank downstream of the West Bridge. These developments could be tailored to provide a significant out-of-the-water experience along this reach as well as to provide parking and access to the trails system for paddlers wishing to access and egress the river. These proposed improvements are shown below.

The West Bridge Site includes a boulder garden type whitewater park located upstream of the West Bridge that would be tailored to recreational and slalom type users. This boulder garden would consist of simple features that include large berm-type eddy features with sloped upstream faces. These sloped upstream faces would be designed to break up ice that might float down the river during run-off. The berm type features would make eddies and small wave features conducive to learning to ferry the boat, do eddy turns, and for training and competing in local slalom-type races.
A river-wide drop structure conducive to park-and-play surfing would be created downstream of the West Bridge. This structure, which would be located to avoid existing buried infrastructure, would create a river-wide play feature designed to accommodate lower flows on the river right and higher flows in the overflow on river left. The drop structure would feature a scour pool that provides over-winter habitat and that would allow boaters to recover and recirculate to the wave during low and medium flows.

This project is located in an area of Fernie which, on river left, does not have sufficient freeboard along the dike to contain the 1-in-200 year flood. Improvements to the dike could be implemented at the same time that the in-stream structures were being implemented. 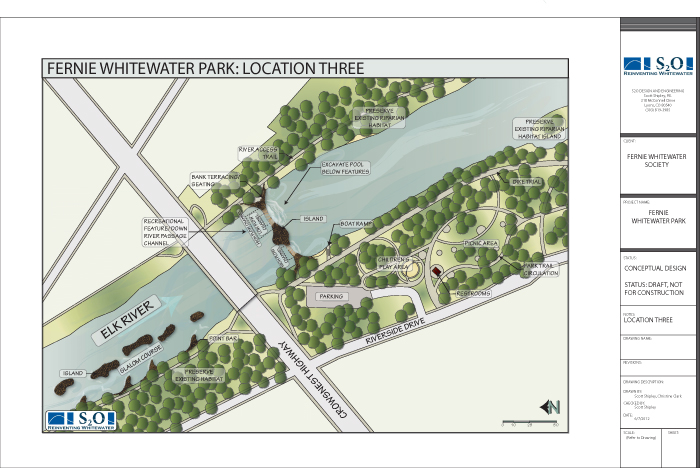