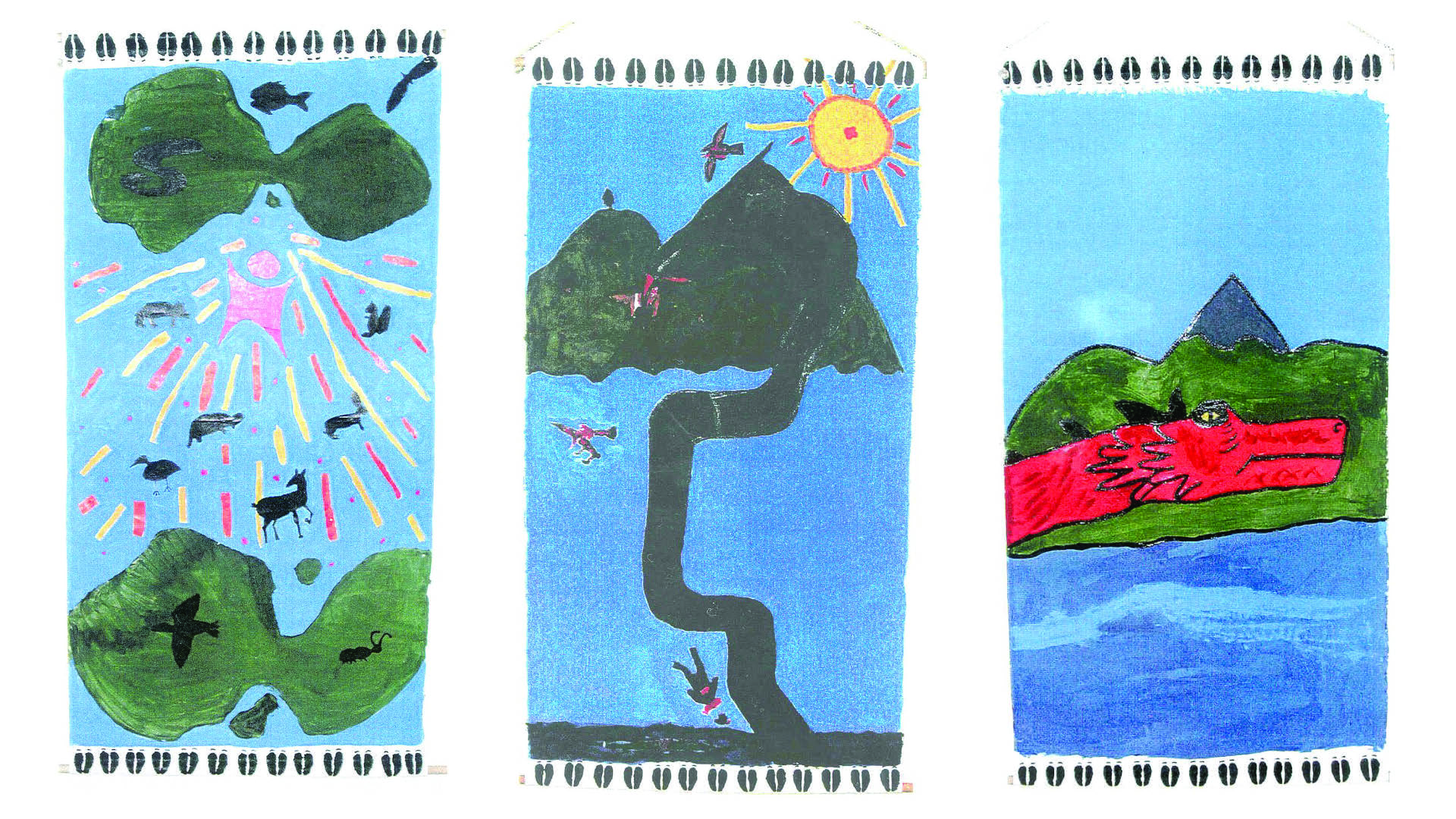 In ancestral times referred to by the Ktunaxa as the animal world, there were references made many times by the Creator to when there will be ʔaqⱡmaknik̓ (people).

At that time, there was some disturbance caused by a huge sea monster known as Yawuʔnik̓, who killed many of the animals. A council was called by the Chief animal, Naⱡmuqȼin. Naⱡmuqȼin was huge. He was so tall that he had to crawl on is hands and knees, for if he stood up his head would hit the ceiling of the sky.

It was decided that Yawuʔnik̓ had to be destroyed. A war party was formed. Yawuʔnik̓ plied the Kootenay and Columbia River System including Columbia Lake and Arrow Lakes.

Yawuʔnik̓ was pursued down the Kootenay River past the Wasa sloughs, now called Wasa, BC. Skinkuȼ got into trouble here when he fell into the river and had to be rescued by Wasa, (horse-tail).

The chase went by where the St. Mary̓s River empties into the Kootenay River. ʔaq̓am, where the St. Mary̓s Reserve is now located, then on down river to Kank̓ak (spring) where Mayuk (weasel) joined the war party. There were animals on both sides of the river as the chase continued, and among the party was a parasite, ʔa·kukⱡakuwum, who had to be carried on the backs of other animals. His name was Ȼ̓umtus and he was mean and bossy. The other animals grew tired of his nagging and dumped him into the river at a place now known as Yaqakiⱡ wat̓mitquⱡiⱡki Ȼ̓umtus.

Leaving the land of the Eagle, ʔa·knuqⱡuⱡam̓ʔamak̓is and into the land of the woodtick, Ȼam̓na ʔAmakis, past Wasaʔki (Waldo) then on past the now 49th Parallel and then past Kaxax (Turtle), now underwater, near Rexford, Montana. The chase went on by ʔa·kiʔyi (jennings) and on by ʔaqswaq (libby) then into Skinkuȼ ʔAmakis (the land of Coyote), past ʔaq̓anqmi (Bonners Ferry, Idaho) then northerly past the now international boundary into ʔaȼpu ʔamakis, the land of the Wolverine, past Yaqa·n Nuʔkiy (Creston, BC) then up the Kootenay Lake past ʔaq̓asqnuk, (Kuskannok, BC). The chase went on by ʔAkuqⱡi (Akokli Creek), past Ksanka Creek. The Yawuʔnik̓ chose to follow the Kootenay River past ʔaqyamⱡup (Nelson, BC). The chase was now in Miȼ̓qaqas ʔamakis (the land of Chickadee).

At Kik̓siⱡuk, (Castlegar, BC) Yawuʔnik̓ went north into the Arrow Lakes, past ʔakink̓aʔnuk (Arrow Rock) where arrows were shot into a crevice in the rock. If the arrow was true, the journey continued, if the mark was missed, beware, danger ahead. The arrow was true and the journey continued past Ȼaⱡnuʔnik̓ (Nakusp) then up past Ktunwakanmituk Miȼ̓qaqas (Revelstoke, BC) where the Columbia River flows into the Arrow Lakes, then up and around The Big Bend then down past ʔaknuqⱡuk (Golden, BC) past Yaknusuʔki (Briscoe, BC) then on past Yakyuȼki. The chase carries on through Kwataq̓nuk (Athalmere) then past Kananuk (Windermere, BC) past ʔakiskq̓nuk (Windermere Lakes), then back into the Columbia Lake, Yaqa·n Nukiy, (Canal Flats, BC). This completed the cycle of the chase.

One day sitting on the river bank observing the chase was a wise old one named Kik̓um. Kik̓um told Naⱡmuqȼin, You are wasting your time and energy chasing the monster. Why not use your size and strength and with one sweep of your arm, block the river from flowing into the lake and the next time the monster enters the lake you will have him trapped. Naⱡmuqȼin took the advice of Kik̓um and did as he was told. The next time Yawunik̓ entered the lake, he was trapped.

Having successfully corralled Yawuʔnik̓, a decision had to be made as to whom the honor of killing Yawuʔnik̓ would be bestowed upon. The honor was awarded to Yamakpaⱡ (Red-headed Woodpecker).

When Yawuʔnik̓ was killed, he was taken ashore and butchered and distributed among the animals. There remained only the innards and bones. The ribs were scattered throughout the region and now form the Hoo Doos seen throughout the area. 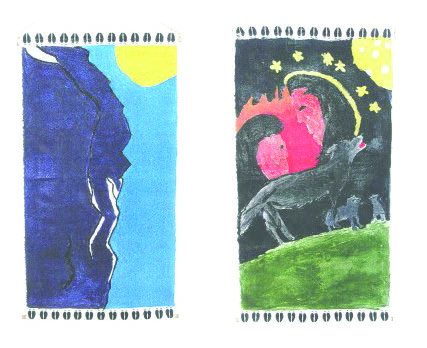 Naⱡmuqȼin looked at his bloody hands and reached down for some grass to wipe his hands. He then let the blood fall to the ground saying, ̓This will be the red people, they will remain here forever ̓.

Naⱡmuqȼin, in all the excitement, rose to his feet and stood upright hitting his head on the ceiling of the sky. He knocked himself dead. His feet went northward and is today know as Ya·ⱡiki, in the Yellowhead Pass vicinity. His head is near yellowstone Park in the State of Montana. His body forms the Rocky Mountains.

The people were now keepers of the land. The spirit animals ascended above and are the guiding spirits of the people.