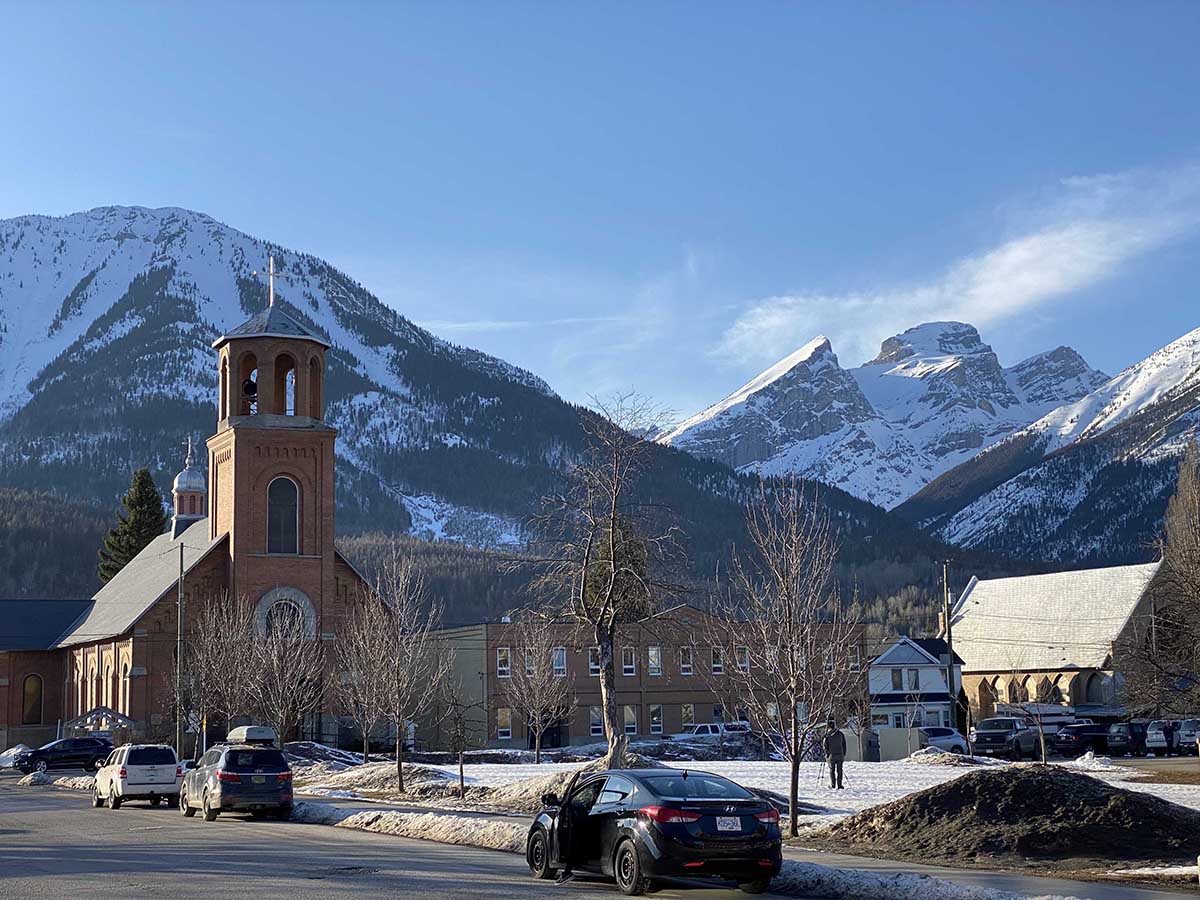 A 100th anniversary celebration was postponed due to the pandemic but it was ultimately held on Saturday, November 5, 2022. The event began with a special mass followed by a banquet.

CWL in Fernie was the first chartered group in British Columbia and ninth in Canada. Chartered on January 11th, 1920, as the “Catholic Women’s Club” and on November 4, 1920 officially becoming the Catholic Women’s League.

Meetings were held monthly, social gatherings were organized and church cleaning, flowers for altars, sewing altar cloths, making calls to the sick and fundraising was accomplished. Meetings were held in members’ homes, opened and closed with prayer, speakers were brought in to enlighten on topics relevant to life and community, at end of meetings a social would follow with games and a luncheon. By the nineteen fifties meetings were held in the church hall as membership had increased. 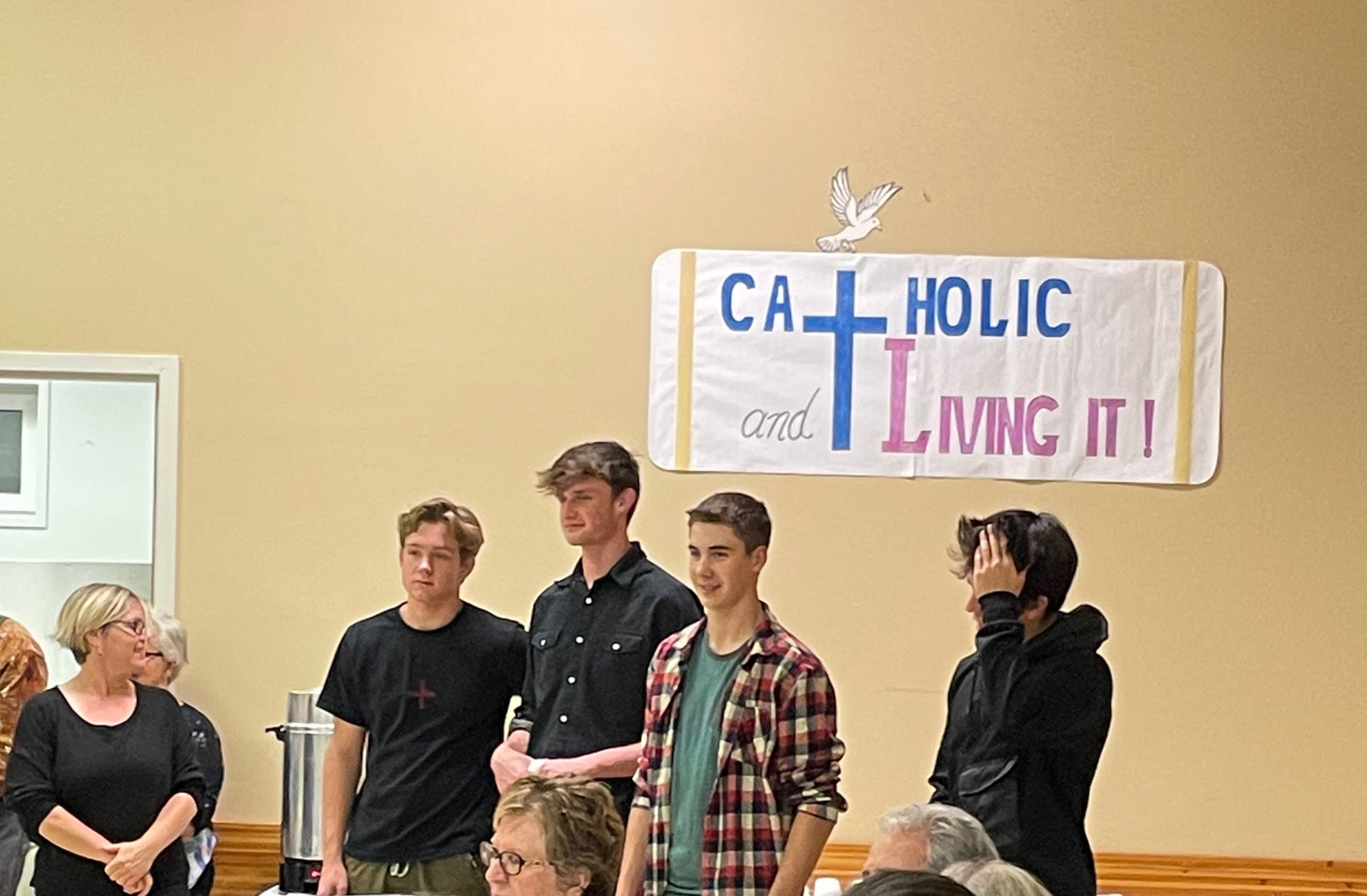 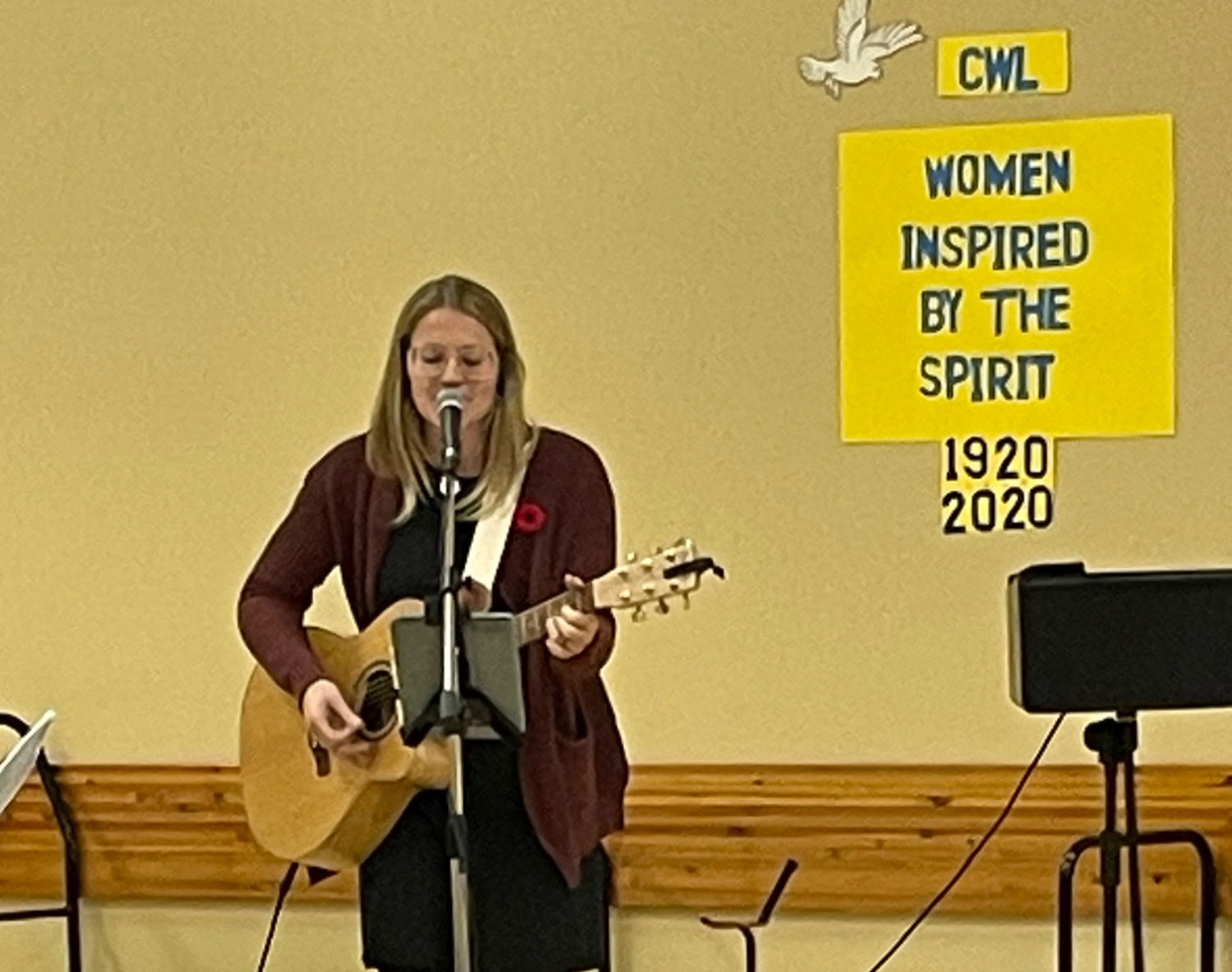 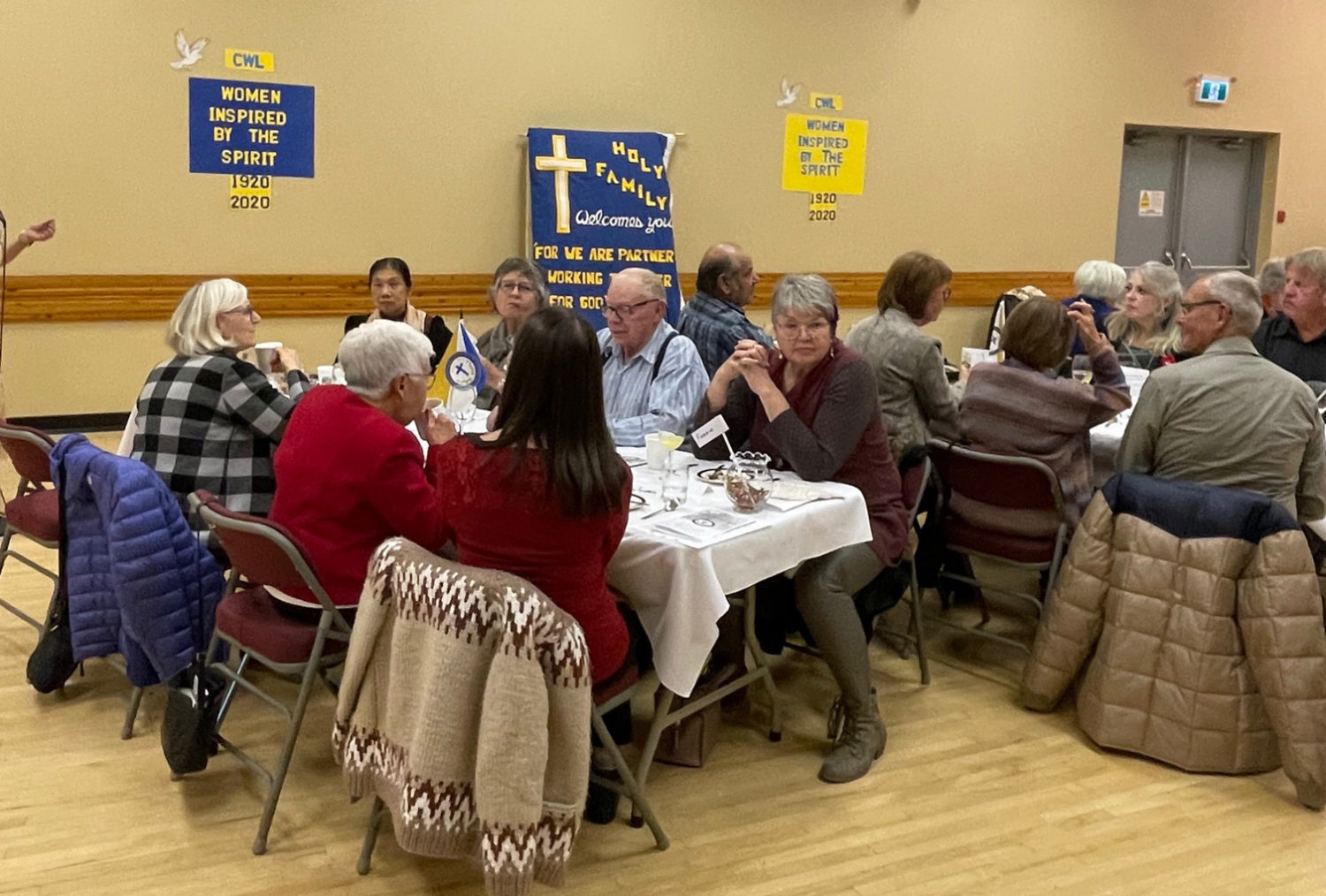 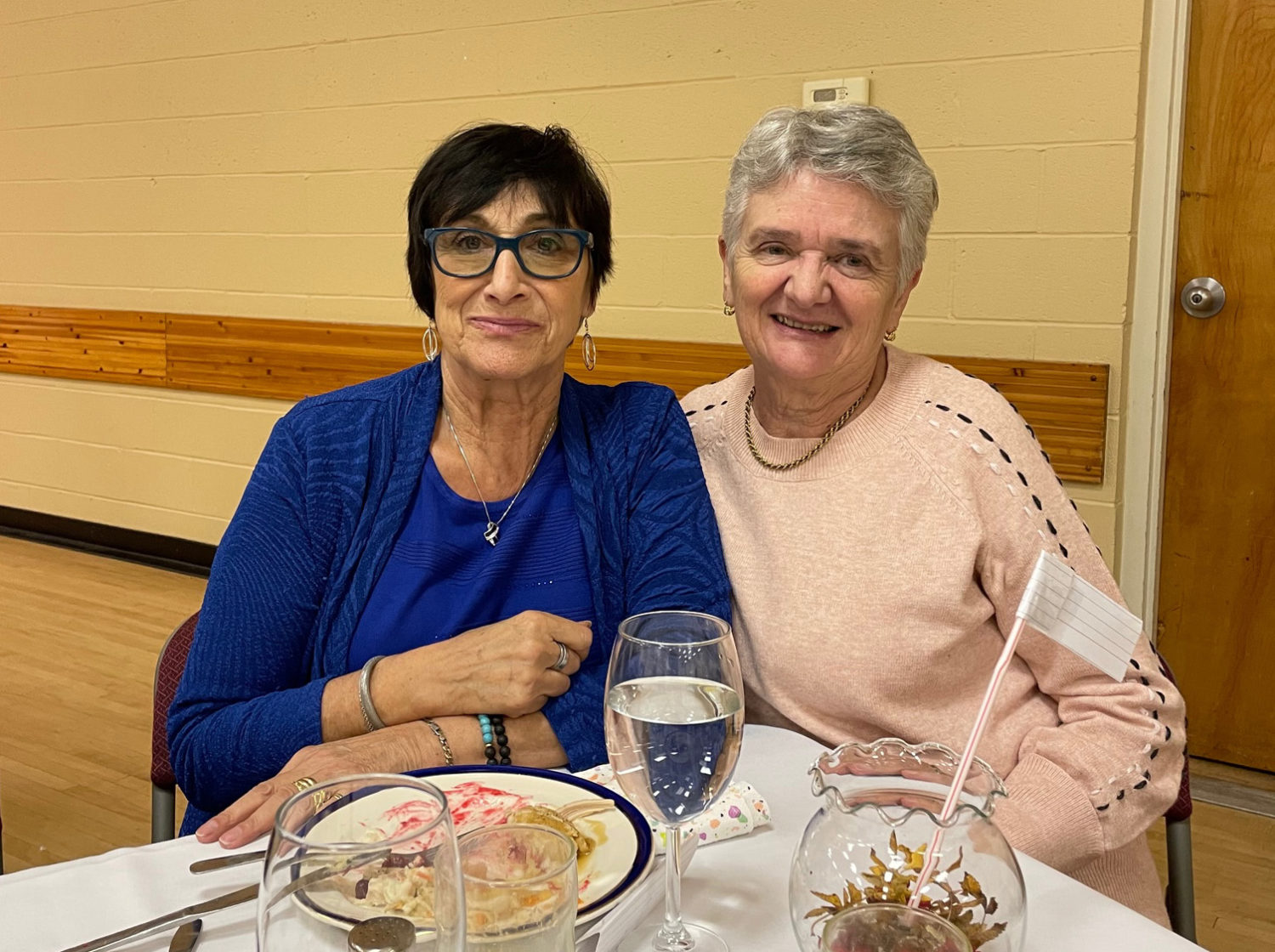 In 1920 it was the goal of the members to advocate for social justice while working towards personal spiritual development. As Fernie’s league is one of the oldest in the country an ornamental flowering plum tree with clusters of rich pink, fragrant blooms that arrive in early spring was planted in front of the Family Center. This hardy Muckle Plum tree is not liked by bears and so is not a bear attractant.

Members Hilda Cadorath and Diane Slyka took the lead on this initiative when the national president wrote that this was something they would be doing. And to date many leagues have followed suit. 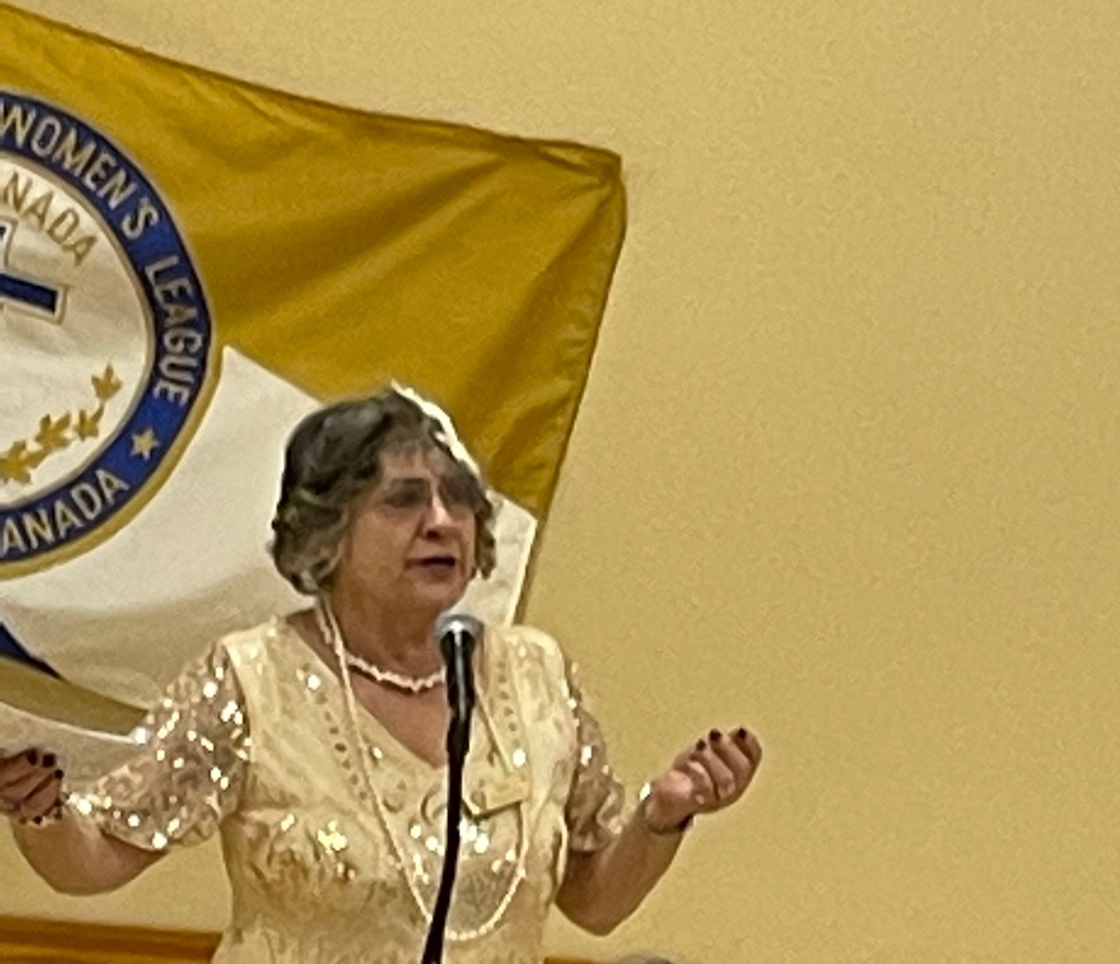 At the dinner master of ceremonies Celia Roccamatisi read greetings from Bishop Gregory Bittman and in his first formal event Mayor Nic Milligan recited the land acknowledgement. Father David John gave the toast to the King and said grace. Parish president Mike Delich gave the toast to the CWL saying “I have had the good fortune of knowing three CWL organizations, Grand Forks with my grandmother, Rossland with my mother and Fernie with our family. This evening I would like to acknowledge and thank the CWL. For the service and volunteerism to the community and to generations of families, for luncheons following funerals, for autumn teas, a true social gathering and event and working with our friends, working with the ministry of our Christ Church Anglican neighbours, for their capacity and willingness to work, restoring and maintaining our heritage landmark buildings, for their enduring strength of 100 years, a remarkable success in a small community in rural BC. Please join in a toast thanking the CWL in Fernie for their century of service and to their next 100 years.”

I spoke next giving the thanks to Celia who spearheaded the event, the CWL ladies that assisted, a special thanks to the Anglican church group for preparing a delicious meal and for being truly loving neighbours in Christ. Thanks went to the members from Cranbrook, Kimberly and Sparwood that braved the weather to attend. Thanks were given to Sylvia Elias and Naena from the Mountainside Church for the beautiful music provided, and to former mayor of Sparwood Lois Halko, parish president Mike Delich, basketball players Joe, Arden, Bronson and Miquel who is here as exchange student from Spain, these young guys were great in clearing the tables and helping in the kitchen. I thanked Mayor Milligan and wife Sylvia for attending as well as all present to for joining in the celebration. 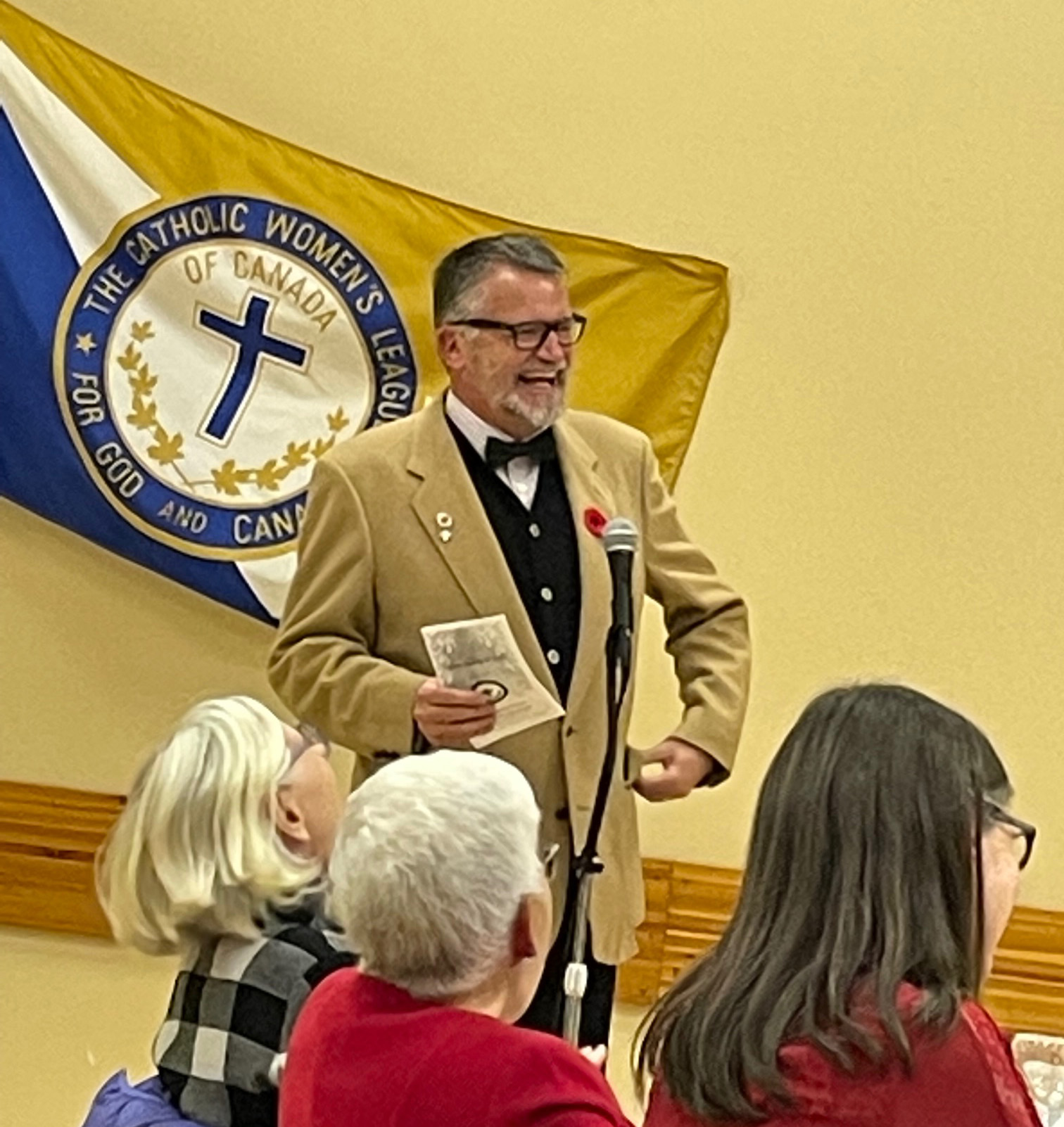 In his mayor’s message Nic Milligan said that “being here tonight was like being at a wonderful family get together. It’s such a wonderful thing to see so many different groups coming together”. There were representatives from four different denominations working together to enjoy an evening of festivity.

I concur with the Mayor, CWL has continued to thrive because of the support from friends and community that share the same love of Faith. It is with this same sentiment that we hope CWL members will celebrate the next one hundred years.

The evening ended with a blessing by Father David John.